Thread is an IPv6 based low-power wireless mesh networking protocol based on the IEEE 802.15.4 wireless protocol operating in the 2.4 GHz open radio frequency band.  Thread network has no single point of failure, including the ability to self-heal, also ensure reliably and securely end-to-end communication with single applications connecting hundreds, and even thousands, of products. It helps in addressing challenges such as interoperability, security, power, and architecture requirements.

OpenThread is a portable and flexible open-source implementation of Thread networking protocol to accelerate the development of products for the connected home and commercial buildings.

For a Thread architecture to be a participant in a greater Internet of Things (IoT) ecosystem and communicate securely with other devices across other link technologies (and the Internet at large), a key element is the OpenThread Border Router(OTBR).

Previously, companies delivering IoT solutions had to deliver some sort of hub or gateway along with their IoT end devices. Due to the lack of IP based technologies, the devices and functionality to mobile or the cloud required application gateways. Such hub or gateway functionality that is not certified, will not have full interoperability in practice. Moreover, unlocking new end-to-end features between devices and mobile apps or the cloud is now throttled by software updates to the hub or gateway to enable the appropriate support.

Since Thread is IPv6, a Thread Border Router can be enough to provide connectivity independent of the application protocols in use—just like a Wi-Fi access point.

What Does OpenThread Border Router Do?

An OpenThread Border Router (OTBR) provides end-to-end connectivity to other IP-based networks, such as Wi-Fi or Ethernet. It serves as a gateway between the Internet and the Thread network. You can access all Thread devices from application, mobile phone, or a cloud-hosted online service when a Thread Border Router is connected to the enterprise network or the Internet. 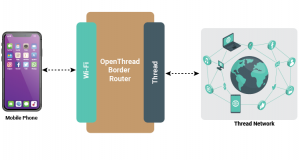 It is an open-source solution fully accessible to all, the development process is fully transparent, and manufacturers can integrate it into their products. It is designed to work with OpenThread released by Nest, but can work with any other Thread Certified implementation.

OTBR supports various features such as :

Thread Border Routers can be simple dedicated devices or part of other devices that are a common component in a network, such as Wi-Fi routers or access points. The OpenThread Border Router works with many chipsets from several suppliers and can optionally be based on low-cost Raspberry Pi based development boards.

The major challenges of Home Automation and the IoT is the lack of standardization in networking protocol, the maturity of technology stacks, security, privacy concerns, etc. Google took a keen interest in the IoT space a few years back and looked for an open set of standard protocols for Home Automation, where devices, sensors, and actuators within a home, communicate among them exchanging valuable information.

The existing protocols like ZigBee (from ZigBee Alliance) and Z-Wave are proprietary, power inefficient, and struggle to carry IP data packets. Multiple devices from different vendors cannot communicate easily with each other as they follow different networking protocols. They rely on a single device, which is typically a Router to communicate with products around the home. So if that device fails, the whole network goes down. The current protocol standards are battery hungry as these devices in your home works 24/7 resulting in quick battery drain. The current set of network protocols is not secure and is relatively easy to hack. OEMs can build Zigbee gateway, Z-Wave gateway, BLE gateway, and Thread gateway-based solution on the platform with any two radios supported with CENTAURI Gateway platform to reduce time to market so that you can focus more on creating values in end-user applications.

Being an IP-based open standard, It allows smart home devices to securely and reliably connect directly to the cloud. IoT enabled Home automation devices such as lights, thermostats, door locks, and security cameras provides a convenient and rewarding experience to consumers. 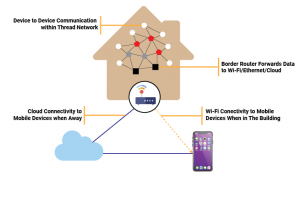 There could be three types of devices in the network – border router, router, and host or end devices.

The OpenThread protocol would help device manufacturers focus on their product rather than spending time on network protocols. The way the standard TCP/IP stack has been one of the reasons for the internet’s success, Open thread is posed to do the same for home automation.

Read our success stories to know how VOLANSYS helps their client in developing IoT solutions using Thread networking protocols and to know more about our embedded engineering services, contact us.

About the Author: Abhishek Shah

Abhishek is associated with VOLANSYS Technologies as Senior Firmware Engineer. He has experience of around 5+ years in the Embedded domain. He has worked on projects in compliance with the standard DO-178A, Linux based projects, and Production test equipment development.