Matter - The Next Big Thing in the Home Automation Industry

Matter – The Next Big Thing in the Home Automation Industry

The Internet of Things (IoT) has opened avenues in the home automation industry. Always-on connected devices change the way we interact, complete tasks and live.

The Internet of Things (IoT) has opened avenues in the home automation industry. Always-on connected devices change the way we interact, complete tasks and live. However, these connected smart devices need interoperability to communicate with different devices. In addition, IoT devices dependent on the cloud can stop functioning if the internet connection is lost. To overcome this issue, Matter protocol helps. Matter protocol enables IoT devices to work offline without requiring access to the cloud, and that also increases the level of security for devices. This is another crucial factor for Matter to be a game changer in the smart home industry.

The Smart Home Industry is very confusing from the consumer point of view. The consumers often face the dilemma while choosing a protocol as there are different protocols, standards in the smart home space for smart home solution development. For example if we buy a smart light for our existing smart home then we have to check the compatibility with the installed ecosystem. To make all the smart home devices work together, the new standard – Matter helps.

What is the Matter Smart Home Protocol?

Matter uses a wireless technology based on Internet Protocol that lets devices work across all major Smart Home platforms like Apple, Google, Amazon Alexa and many more. The Matter protocol provides the Smart Home devices a universal language, enabling them to share the information across ecosystems. Currently, Matter is managed by Connectivity Standards Alliance, formerly the Zigbee Alliance.

As the Smart Home market evolves, the cyberattacks threats increase significantly. Some of the threats like malfunction via remote control, data and privacy breaches, DDoS (Distributed Denial of Service) attacks which may cause major complications. To overcome these, matter protocol provides device authenticity with secure communication.

Why is Matter Protocol Important?

The rising trend of the smart home ecosystem into home and workplaces also increases the purchase of smart home devices from several brands. For example, you might consider Amazon Alexa and Google Assistant over other home security brands because of the difference in features. However, an issue over here arises. Will users be able to use smart home devices from different brands efficiently?

The new connectivity standard, Matter, can simplify the smart home ecosystem. Matter contains a multi-admin control feature allowing consumers to use multiple platforms simultaneously. As long as the devices in use are Matter-enabled, they can be connected to various platforms irrespective of the brand. For example, if you’re using a Nest Thermostat and you wish to control it using Apple Home Kit or Google Home or even both at the same time, Matter can make that happen. However, since Matter is a connectivity protocol, you’ll need to have all the devices to be Matter certified in the existing smart home ecosystem. 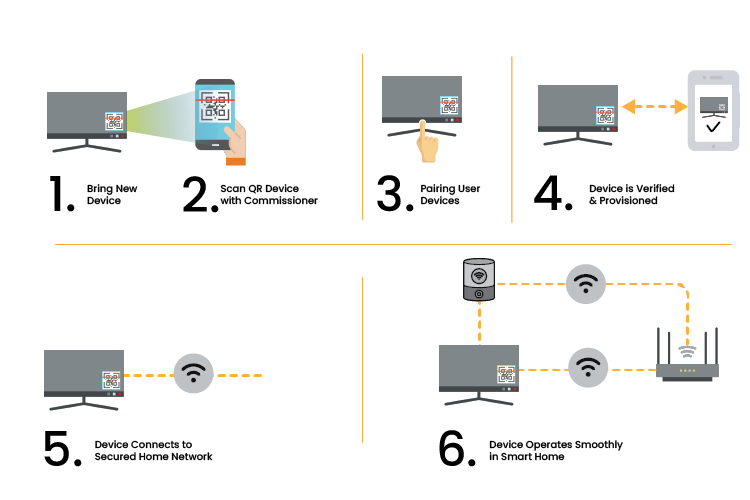 Which Protocols are Supported with the Matter Protocol?

Matter supports Wifi, Ethernet and Thread (802.15.4) protocol. For thread devices, a border router is required to connect IP based networks.

Matter uses the ZCL (Zigbee Cluster Library) as a data model which defines the end node capability and its role through different types of clusters and its attributes.

Once the Matter protocol is officially released and the user purchases matter accessories such as smart bulb, door lock, presence detection sensor, glass break sensor, etc. from the market and installs it in an existing Smart Home Ecosystem then it requires a process called commissioning. Commissioning is a process to join the Matter network securely.

The device then switches to either Wi-Fi or Thread as a communication protocol and authentication process resumes to incorporate the device into the Matter network. Once the commissioning process is completed, the device is now Matter enabled and can be controlled using a Matter controller.

For Matter cloud connectivity is optional. Users can control the accessory locally via mobile application, voice assistant or smart TV.

In Matter 1.0, major focus is on Smart Home applications. In future, this technology will be used in other areas like IIOT (Industrial internet of things), Medical and automotive application.

About the Author: Dhruv Shah

Dhruv Shah is an IoT enthusiast who has been associated with VOLANSYS for the past 4 years. His major contribution lies in the Embedded Domain, including product development services on different IoT, Medical and home appliance based products, using languages like C, C++ and Python. He has an in-depth knowledge of RTOS and bare metal based application and driver development.

How Private 5G Networks are Shaping the Future of Enterprise Solutions