With the proliferation of wireless devices, nowadays a strong signal strength and high-quality RF antenna design and integration is desired in the devices to allow for optimum performance.

With the proliferation of wireless devices, nowadays a strong signal strength and high-quality RF antenna design and integration is desired in the devices to allow for optimum performance. Whether it is an off-the shelf-product or a highly customized solution, antenna integration is not trivial and should not be an afterthought. It is a requisite to match the antenna input impedance to 50Ω which ensures maximum power transfer to the antenna from the RF circuitry without any reflections.

One of the most critical factors in the implementation of a trace or a chip antenna is the impedance matching of the antenna to the radio chip. The antenna must be impedance matched when assembled in the product since having an unmatched antenna may result in the following consequences:

Most PCB trace or chip antennas are constructed as a quarter-wave monopole which requires a solid ground plane on all the PCB layers for their proper operation. This ground plane is referred to as a “Counterpoise” and is important since it acts as an imaginary pole of the monopole antenna for it to perform like a complete dipole antenna. 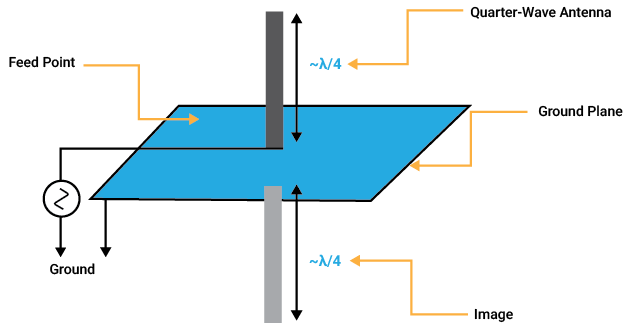 The counterpoise shall be at least λ/4 units in length and width. The effect of various ground plane dimensions is shown in the image below using an example of a chip antenna implementation. 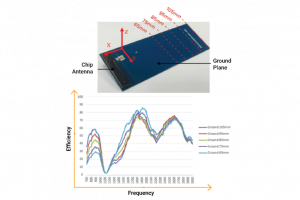 Furthermore, the PCB material also influences the antenna system impedance. Especially for FR4 type substrates, which are also dependent on the weaving pattern that causes changes in the dielectric constant of the material as per the tightness of the weave and can cause local impedance discontinuities due to changes in parasitic capacitance. For a PCB trace antenna implementation, it is imperative for a designer to follow the antenna design guideline and the antenna manufacturer’s recommendations closely with respect to trace width, layer stack-up, counterpoise dimensions, PCB material and material weave pattern to achieve optimum results while implementing a trace or a chip antenna. The antenna system impedance is also affected by other circuit components surrounding it and the product enclosure material and shall be taken into account.

An impedance mismatch can be debugged using a Vector Network Analyzer (VNA). The VNA measures at the plane of calibration by default and is required to be calibrated before the measurement can be taken. For matching impedance between antenna and the RF chip, return loss (RL) also known as the S11 parameter needs to be measured.

Most VNAs come with N-type connectors as their ports. The first step to debug any antenna system is to calibrate the VNA at the calibration plane by using an N-type to SMA cable and various(open, short and 50Ω) calibration standards. The VNA must be connected to the antenna system such that the matching network is also included in the measurement process. This can be done by mounting a 0Ω series resistor at “MC1” and using a suitable cable which is termed as “Port Extension”. It is necessary that the port extension is of a known length and a known velocity factor since this data needs to be fed into the VNA in order to compensate for the extra length and the impedance that the port extension adds to the system during the measurement. Furthermore, the port extension should be selected such that its characteristic impedance matches the target system impedance.

Another method of calibrating a VNA is to create a Short/Open/Load (SOL) condition on the PCB itself using the matching component pads. This does not require a port extension to be applied. As per the board implementation, a suitable method out of the two shall be chosen. 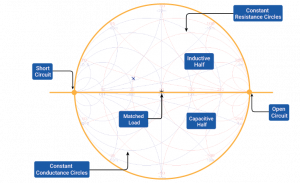 As an example, the image below shows the matching of an antenna system with a complex impedance of 25+j8.5Ω to the target impedance of 50Ω using a series inductor and a shunt capacitor.

As complicated as the impedance matching seems, it ensures the optimum performance of any wireless product without which an antenna can become a bottleneck in the product performance.

VOLANSYS has vast experience in designing and developing the hardware of complex, faster, reliable, and efficient solutions. Our RF antenna design services extend through design specification, antenna prototyping, impedance matching, network analysis, smith chart, optimization and verification of the selected antenna, and many more. Our experts ensure impedance matching and reduce power losses between the antenna and RF transmitter.

To know more about our work on RF antenna design, read our hardware engineering success stories.

About the Author: Sarth Dave

Sarth is working with Volansys as a Senior Engineer. He has 5+ years of experience in the hardware and embedded field and is involved in system architecture, design and development, testing, certification and manufacturing readiness of a product.

Why HALT Testing and HASS Testing is Important in PDLC

Importance of DFM, DFT, and DFA in Product Design

Why is Cybersecurity Important for Medical Devices?