Wi-Fi has optimized the use of available unlicensed spectrum to deliver efficient and reliable connectivity of 2.4 GHz and 5 GHz bands.

Wi-Fi has optimized the use of available unlicensed spectrum to deliver efficient and reliable connectivity of 2.4 GHz and 5 GHz bands. Building a strong Wi-Fi momentum, the Wi-Fi Alliance has introduced its new Wi-Fi 6E which will extend and strongly advocates the capability of Wi-Fi 6 with a 6 GHz band. This move from Wi-Fi will unlock the potential of Wi-Fi 6 with some additional features which will deliver the next-generation solutions.

According to the research report by a director at IDC, it is expected that 338 million devices will enter the market by 2021 and 20% of the Wi-Fi 6 devices will be supporting 6 GHz by 2022. Last year, a decision was announced by the U.S. FCC to open a 1200 MHz of 6 GHz spectrum for Wi-Fi and some other countries like the U.K., Brazil, Argentina, and South Korea also made their decision to deliver 6 GHz devices.

Wi-Fi conveys additional internet traffic as compared to other wireless technology and is achieved despite having not more than 300 MHz of unrestricted spectrum available. The usage and demand of Wi-Fi networks increasing drastically while available unlicensed spectrum i.e., bandwidth remains unchanged. There are only three 20 MHz wide non-overlapping channels available in 2.4 GHz and not only used by Wi-Fi but also other wireless technologies such as Bluetooth, Microwave, ZigBee, etc.

In 5 GHz, there are 25 channels that can remove the spectrum obstacles but the usable amount in 5 GHz is less and only 16 are Dynamic Frequency Selection (DFS) channels which are used by radar and utilize the same frequency. The Wi-Fi AP (Access Point) should monitor the presence of radar signals continuously.

Comparing 2.4 GHz and 5 GHz, the 5 GHz is faster and has more channels than 2.4 GHz but since Non-DFS channels are limited, it compels users to share available bandwidth that causes congestion. The legacy devices (802.11b/g/n) need more air time to transmit data, thereby less throughput and increase latency for all users. The congested environment becomes a barrier to enable the 80 MHz or 160 MHz channels, which comes up restricting higher throughput that can be achieved only with the wide channel bandwidth, that’s where 6 GHz reflects. Taking advantage of the 1.2 GHz of new Wi-Fi spectrum, Wi-Fi 6E provides greater speeds, guaranteed low latency, and high capacity for cutting-edge devices. 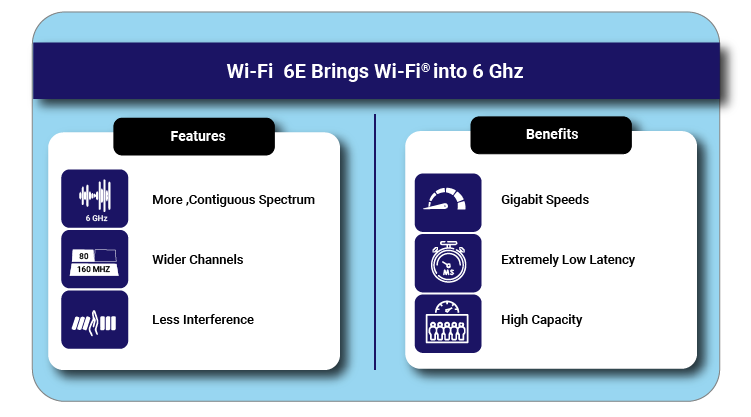 The most advantages that Wi-Fi 6E furnishes are the greater spectrum, lower latency, reduced congestion, and overhead, enabling the full performance of Wi-Fi 6 technology. Let’s talk about the key features of Wi-Fi 6E:

Few protocols for operation in the 2.4 GHz, 5 GHz, and 6 GHz bands defined by IEEE 802.11ax HE standard are stated below:

Wi-Fi 6E brings its own set of challenges for enterprises or operations looking to upgrade their network. Let’s have a look at the challenges:

However, Wi-Fi 6E OFDMA and TWT are the most powerful features that enable huge improvements in battery life that perform an important role in IoT and Industrial IoT (IIoT) 4.0. Considering the features and benefits of Wi-Fi 6 into the 6 GHz band will bring enormous opportunities for the enterprises, operations, and evolve the overall performance of the device.

Being a one-stop solution enabler, VOLANSYS delivers powerful immersive experiences in the era of wireless connectivity. Read our success stories to know in detail, how we help our clients in designing and developing the next-generation wireless connected solutions.

Also, read our blog on the Wi-Fi technology written by our experts or connect with our team for the consultation.

Note: The content of this blog is based on the personal knowledge of any research work done by the individual. The market research report on Wi-Fi 6E is used from the Wi-Fi Alliance newsroom.

About the Author: Chirag Patel

Chirag is working as a Principal Firmware Engineer at VOLANSYS Technologies having 7 years of experience. He is a passionate solution provider and has experience in various wired and wireless protocols, Linux and RTOS application development as well as hardware development and troubleshooting.

How Private 5G Networks are Shaping the Future of Enterprise Solutions