The pace of innovation in networking world is increasing with the immense growth in IoT devices, increasing data traffic, new protocols and private and public clouds. The future of networking has gone beyond that of separating data and control planes for SDN, to programming the forwarding logic deep within the ASIC. Technology is now moving from traditional fixed architecture silicon switch to flexible programmable switches. The new programmable ASIC allows to support custom protocols as well as protocols of today and future. This demands new higher level domain specific language to simplify the writing of forwarding plane. Each ASIC manufacturer has to come up with their own custom language which is more of dependent on the hardware architecture. Porting of forwarding plane logic from one manufacturer of networking ASIC to other will require lot of efforts and is really painful. This generates a need of standard language which is independent of underlying hardware and protocols.

P4 (Programming Protocol-Independent Packet Processors) is an open source domain-specific programming language designed specifically for programming reconfigurable networking pipeline. The P4 language is public and developed by the p4.org consortium, which includes various companies in the area of networking, cloud systems, and academic institutions. Initially, P4 was designed for data plane programming of network switches but its scope has been broaden to cover programmable network elements such as hardware or software switches, network interface cards, routers or other packet processing systems.

From the past few years, it has been clear that packet processed by the data plane in any networking devices can roughly be in three basic stages. 1) Parser block: Responsible for packet identification and extraction, 2) Control block: Responsible for match + action and 3) DeParser: Responsible to form the desired egress packet. Networking Chips are being built this way, and are protocol independent. P4 is that language which can compile for any target device to specify how the packets can be processed in a data plane. Architecture of P4 Compiler helps to make it target independent by separating language and the target model. P4 has frontend open source and backend loose to make it independent of target. Each chip vendor can implement its own compiler backend to map to their hardware architecture. The Architecture of P4 also helps to insulate hardware details by defining their own model and then writing p4 backend to support the same. 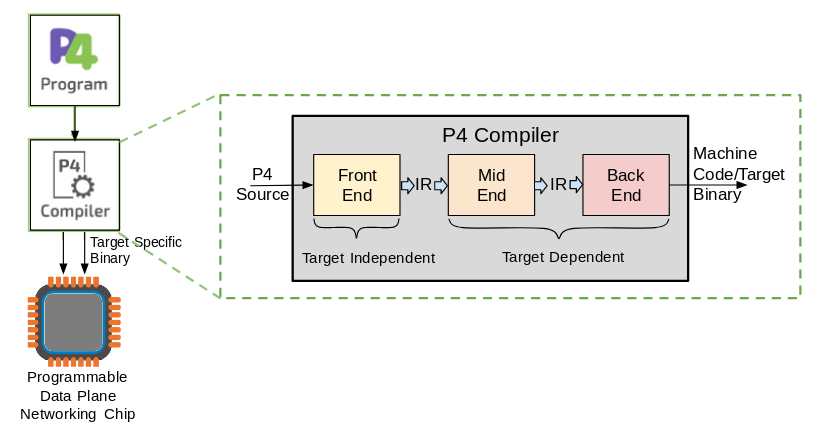 Each chip manufacturer just needs to have P4 compiler tool chain compatible with their hardware, users can write their own P4 program independent from the vendor’s dependency,  compile and run without compromising speed. The user only needs to focus on actual packet processing logic without worrying on underlying hardware. Compiler will generate runtime code for your hardware. Figure 2 shows the core components provided by P4 for data plane programming. 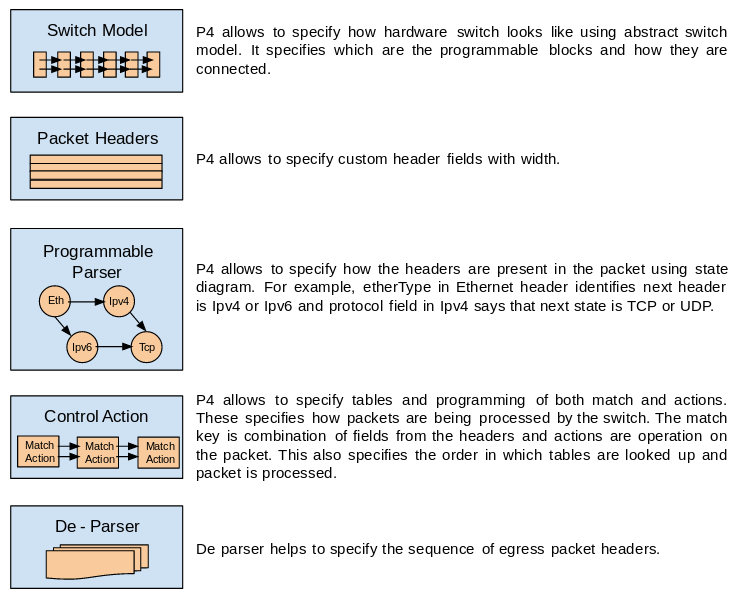 How is P4 beneficial?

P4 has opened up lot of opportunities and changed the way networking chip where designed. P4 architecture gives a sample model and idea to design a fully programmable chip. Moving forward all traditional switches will be soon converted into programmable switches with fully software-defined data and control plane.

About the Author: Komal Shah

Komal is associated with VOLANSYS Technologies as a Senior Engineer with 3+ years of experience in development of Software Development Kit (SDK) for reconfigurable networking switches. She has good hands-on working with programmable Parser, P4 Compiler back-end development and data plane pipeline programming. She is always ready to take up challenges.